This site uses cookies to help provide the best user experience. Cookies are small text files placed on your computer to help the website provide a better user experience. In general, cookies are used to retain user preferences, store information for things like shopping carts, and provide anonymized tracking data to third party applications such as Google Analytics. As a rule, cookies will make your browsing experience better. You may prefer to disable cookies, however you will be unable to view this website at this time. The most effective way to do this is to disable cookies in your browser. We suggest consulting the HELP section of your browser.

This international branch of Bodē Pro is no longer in operation. To view our current product lineup, learn more about our dynamic range of ultra-premium supplements, and to order from one of our available markets, please visit bodepro.com! Thank you!

If your browser does not automatically redirect, please click here.

The TEN formula contains a number of proprietary ingredients known to support mitochondrial functions.* Mitochondria are intracellular organelles, responsible for producing 90% of the body's cellular energy. Bod•ē Pro elected to perform pilot clinical testing on the effectiveness of its patent pending TEN formula on human mitochondria at the cellular level and overall well-being.

To date, six pilot tests have been conducted to determine the effects of TEN at the cellular level, particularly under stressed human culture conditions.

Although these six studies were small in scale and no conclusive findings can be inferred from them, their results are extremely promising. Bod•ē Pro is planning to use the data gathered from these initial studies to conduct a larger human clinical study to further confirm these preliminary findings. Please note that the subjects tested for their Cortisol and DHEA levels were given a double dose of TEN. 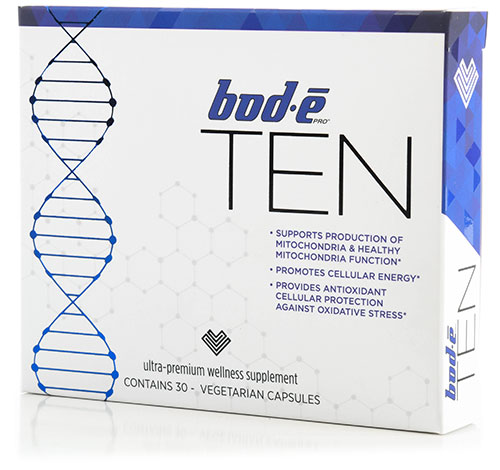 *These statements have not been evaluated by the Food and Drug Administration. This product is not intended to diagnose, treat, cure or prevent any disease.